How Did I Get Here? I’ve only been a nurse for 10 years.  My first career was in global information technology.  I worked that job until my early 40’s before I decided to do something different.  After moving back to the US and joining our local volunteer fire department I found that I had a real affinity for the emergency medical runs.  This grew into a passion that eventually led me to go back to college for my nursing degree.

What Do I Know?? My first hospital job after graduating was in a small community ER with only 16 beds in our department.  Anything major or unusual was quickly stabilized and transported out to the major trauma center about 25 miles away.  After a year there I started working as a travel nurse taking short term contracts at various hospitals around the country.  I was a traveler for about five years and I worked at everything from poor facilities in impoverished ghettos to leading-edge teaching hospitals.  This might seem like a lot of experience but in the world of emergency nursing, I was still very much a beginner. It was during my time as a nurse that I first learned about pressure ulcers and the horrors they inflict on people.  This was also the time that I first came up with the idea for Wave Therapeutics’ bedsore prevention technology.  I eventually stopped working as a bedside nurse to focus my efforts on research and development for Wave. The reason I’m telling you all this is because after a little more than three years away from the ER, I’m now jumping straight into the fire.  I am acutely aware of my limited experience and the deficits that come with a long absence.  It will be my first priority to be helpful while not inadvertently killing anyone through a stupid mistake. 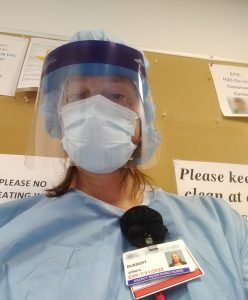 The Day Begins. My first day back in the ER began with the staff huddle.  It was here that I received my personal protective equipment or PPE as everyone calls it.  My PPE consisted of an n95 mask covered over with a surgical mask on top of it.  Next, I incorrectly put on my hair bonnet and had to have another nurse fix it for me.  Then, came my plastic gown and gloves.  Finally, I put on a clear face shield to help protect my eyes from airborne particles.  This was to be my armor for the next twelve and a half hours.  It started out hot and would only get hotter as the day went on.
We left the huddle and headed to our various assignments.  The new nurses to the unit, myself included, would be paired up with an experienced nurse to help show us around the facility.  The nurse who was my partner had been at the facility for a lengthy seven days, making her an old-timer to the department.  “A” was an ER nurse from Dallas, Texas.  She was contracted to work an insane three weeks of twelve hour shifts in a row before either signing up again or heading back home for a break.  I had been offered a similar contract, but I’m just too old and too tired for that kind of nonsense!  I’ll leave that to the youngun’s like “A”.  Together we received reports on our patients and began rounding to do our initial assessments.
In this ER everyone is assumed to be infected with COVID-19 regardless of how they are presenting.  Someone could show up having a heart attack and we’ll still treat them as if they were infectious.  The disease is so prevalent here in New York that you have no other choice.  Of course, we’ll treat the most life-threatening conditions first, but we’ll do so in full protective gear.
A large percentage of the staff present were travelers like “A” and myself.  While I heard speculation as to the reasons for this, I won’t spread those rumors here.  Suffice it to say that very few of us were familiar with the layout of the facility nor knew where to locate many of the more specialized supplies.  Still, the team came together exceptionally well.  As I thought about it I realized that I was surrounded by a group of highly motivated and skilled professionals who had traveled across the country to address a major healthcare crisis, regardless of the risks to themselves.  These were exactly the kind of people I would want at my back in any tense situation.  As this thought washed over me I realized that I’d be okay while in New York.
My twelve hours flew by fast as we literally ran through our day.  I’ll tell you about the details of life in the ER in another post as this one is getting a little lengthy.  Suffice it to say that I was dragging by the end of my shift.  I gave report, clocked out, and left the hospital for home.  Let me tell you, the walk back was a heck of a lot more tiring than the walk there had been that morning!  I stumbled into my apartment and went directly into the bathroom.  I stripped off my scrubs, took a lengthy shower to wash away the cooties, and then passed out in my bed.  Tomorrow is a day off and some much needed rest for my sore feet.
Can I do this for three months?
By Bill Haber on April 15, 2020   /   Wave Blog
Tags: bedsore, Brooklyn, CEO, coronavirus, Covid-19, Healthcare, nurse, NYC, pressure ulcer