NYC Mayor De Blasio Stops By |  Jessica Bussert  |  Founder & CEO Saturday, April 25th
Today was my first day back following the car accident. You can’t imagine how many questions I had from staff and even a few patients! People wondered if I’d been mugged or involved in a domestic dispute. They almost seemed unimpressed when I told them I had been run down by a car! I’m still sporting a nice shiner so the accident was obvious to anybody who looked at me.
I’m not sure what it was but it felt to me as if something changed in the Brooklyn since I had last been in the hospital. It was nothing overt. There is still nothing I can really put my finger on. But it almost feels like the city is starting to wake up.
During the whole time I’ve been here, I’ve not taken care of one highly intoxicated person. I can’t begin to tell you how strange that is for a big city hospital. But on Friday night I got myself a doozy! My patient came in near-comatose, smelling strongly of alcohol. When the lab work came back he had a blood alcohol nearly six times the legal limit! That’s almost a record in my book. Almost, but not quite. The record actually goes to a guy in Las Vegas who came in with eight times the legal limit. I don’t suggest any of you try to beat this as such an amount would kill anyone who wasn’t acclimated to it.

Later in the evening, we had an unexpected visitor to the hospital. 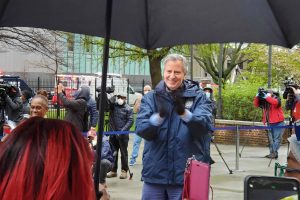 There were other changes that day. The patient mix seemed slightly different. The energy on the sidewalk as I was walking to and from work seemed just slightly heightened. Even the staff I interacted with seemed to have a little more energy. None of us wants a premature end to shelter in place because we all know just how dangerous that would be. Still, it’s very obvious that when the quarantine ends, things are going to spring back to life quickly. People just need to be together, I guess. I know I do. The hardest thing about being in Brooklyn for me has been isolation from family and friends.
Later in the evening, we had an unexpected visitor to the hospital. New York mayor Bill de Blasio came by at 7 pm with about two dozen fire trucks for an impromptu celebration of healthcare workers. As the clock struck seven, the traditional shift change time, the fire trucks all started blaring their alarms. It was a nice gesture though I heard more than a few people mutter, “get us more PPE!”. Personally I’ve not found that to be too much of a problem. The hospitals have been doing a pretty good job of keeping me safe.
Still being somewhat sore after the accident I was glad when my shift ended, and I was able to stumble back home to a shower and my bed. I’m not scheduled to work tomorrow, so I’ll be free to nurse my wounds just a little longer!
By Bill Haber on April 27, 2020   /   Wave Blog
Tags: Brooklyn, CEO, coronavirus, Covid-19, Healthcare, mayor, new york, nurse, nursing, NYC