Today was my first real day off since arriving in Brooklyn.  Sure, I’ve only had one day in the ER, but I’ve spent a ton of time getting ready for that one day!  I started things by calling all around the area trying to locate a chiropractor to help me with the aching back I’ve been sporting for the past couple of weeks.  As it turns out almost everyone in the area was closed due to the virus.  After making about twenty calls I finally found one about four miles away that could see me today if I managed to get there in the next 30 minutes.  Once again I called my trusty Uber for a lift and I made it to the clinic with 17 seconds to spare.

After my adjustment, I had much of the rest of the day free to enjoy.  It was a lovely day so instead of catching a ride, I decided to walk the four miles back home.  My route took me through the business district of Brooklyn, past the Barclays Center Arena, and then into Prospect Park.  Randomly, and for most of my walk, I followed the same guy going the same direction as I was.  A couple of times I even tried to vary it up so he wasn’t 50′ in front of me.  I didn’t want to poor guy to think I was about to mug him!  Regardless of what I did after a few moments, I would find him right back there in front of me.  Freaky!  Finally, after something like two miles, he turned right and I turned left and we finally went our separate ways with neither of us getting mugged.

Even though it was such a long distance I was pleasantly surprised that I didn’t need much help finding my way back to the apartment.  I’ve not been here a week and I’m starting to get oriented to the place. 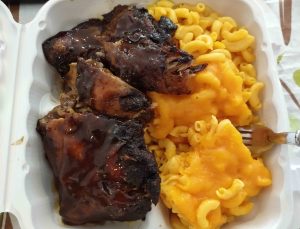 When I was still about two blocks away from home I came across a Jamaican restaurant that was serving up jerk chicken.  If you’ve never had it, jerk chicken is spicy hot and very delicious!  I picked up an order to go with a side of cheesy macaroni and a couple of bottles of water.  I’m doing what I can to eat at little local places just to help support the economy.  I’m glad I did because it ended up being amazing jerk chicken!

This evening I ventured out once again to a little brat house just around the corner from my apartment.  I ordered a cheesy brat for my dinner and picked a liter of a nice draft pilsner to go.  Take out draft beer is a new thing for a lot of restaurants and I got a huge chuckle when they delivered my beverage in a large Mason jar!  I felt like I was back in the moonshine days!  Being that I have to be back in the ER at 8:00am, I’ll probably leave some of that jar for another night.  I’m almost sure that’s what I’ll do…  😉